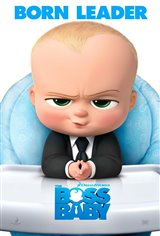 Tim (voice of Miles Bakshi) is a very happy seven-year-old boy who enjoys all the attention he gets from his mom and dad. One day, however, his parents tell him he is getting a younger brother. In walks an unusual baby boy (voice of Alec Baldwin), who causes utter chaos with his arrival. Wearing a suit and carrying a briefcase, this Boss Baby is more than he appears.

Boss Baby has been sent by Baby Corp. to investigate and put an end to Puppy Co., an organization that is launching a “forever puppy” to replace babies. Boss Baby tries to focus on his mission, while Tim comes up with a plan to get rid of his new baby brother.