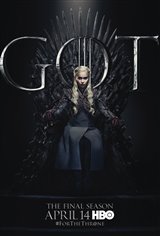 Jon Snow (Kit Harington) and Daenerys Targaryen (Emilia Clarke) have joined forces, along with other allies, to face the Night King, the White Walkers and their army of wights. The Night King and his crew are a big threat to Westeros. With the war between the living and the dead, who will take the Iron Throne? Who will not live to see the end?

The final season of Game of Thrones will premiere on HBO April 14, 2019.