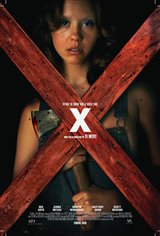 In 1979, strip-club owner Wayne (Martin Henderson) decides to gather a group of friends and employees, including his girlfriend Maxine (Mia Goth), to make a low budget adult film titled The Farmer's Daughter in rural Texas.

In order to save money on hotel rooms, the cast and crew stay at a remote farmhouse owned by a reclusive, elderly couple. When their reclusive, elderly hosts catch them in the act, the filmmakers find themselves fighting for their lives.