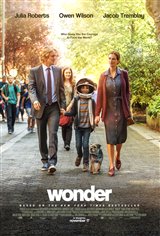 Auggie Pullman (Jacob Tremblay) was born with a facial deformity and has had 27 surgeries in order to help him to breathe, see, and hear without a hearing aid, but he still looks different from other kids. He's been homeschooled up to now by his mother, Isabel (Julia Roberts), but now that he's 10, she's decided he should go to school with other children at the beginning of fifth grade.

Before the school year begins, he's introduced to three kids — Jack Will (Noah Jupe), Julian (Bryce Gheisar) and Charlotte (Elle McKinnon) — who show him around school, but as time goes on, Julian quickly proves to be a bully, often making fun of Auggie. Meanwhile, Auggie's sister Via (Izabela Vidovic) is struggling with her own problems fitting in at high school, while Auggie's father (Owen Wilson) reassures his son that everyone has troubles.

Based on the New York Times bestseller by R.J. Palacio.