Light of My Life 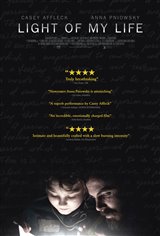 A father (Casey Affleck) and his daughter (Anna Pniowsky) journey through the outskirts of society a decade after a plague has wiped out nearly all of the world's females. In fact, the little girl, now 11, has no memory of ever seeing another female.

In order to protect his daughter, whom he calls Rag, from "angry men" in this dystopian world that's devoid of females, he disguises her as a boy, and shows her to how to live off the land. They camp in the woods, and he teaches her about ethics and history, memory and morality as they make their way to Rag's paternal great-grandmother's house, where the father hopes they'll be safe. But a chance encounter threatens the precautions Dad and Rag have set up, risking the refuge this parent and child have created in a world thrown completely out of balance.