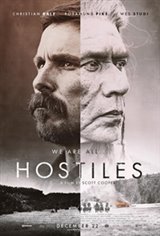 Watch Trailer
Embittered U.S. Cavalry officer Captain Joseph J. Blocker (Christian Bale) is given the task of accompanying Cheyenne Chief Yellow Hawk (Wes Studi) and his family from Fort Berringer, an isolated Army outpost in New Mexico, back to their tribal lands in Montana in the late 1890s, in order to make sure they arrive safely without incident. Yellow Hawk, who has spent seven years in captivity, has cancer, and wants to die in peace on his own land.

Blocker hates "Indians," having slaughtered many of them himself, and having nearly died at the hands of a Kiowa. Although he sees them as nothing but savages, he's still forced to accept the assignment. Once he and his soldiers get out of sight of the fort, he orders that the Chief and his family are put in chains.

Along the way, they come across grieving widow Rosalie Quaid (Rosamund Pike), who lost her husband and children during an attack on her homestead by members of another Native American tribe. Not knowing what else to do, Blocker has her join them on their journey as they try to survive the hostile territories that they must cross to reach Montana.