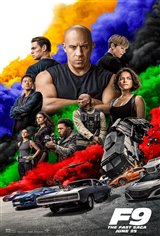 Find Showtimes & Theaters Near Me

Even as time moves on for Dominic Toretto (Vin Diesel), Letty (Michelle Rodriguez) and his son, little Brian, there is still a longing inside him for their past lives in the fast lane. With Han (Sung Kang) back in the fold, Dom and his crew will need all the help they can to square off against Dom’s younger brother Jakob (John Cena), the most skilled assassin and high-performance driver they’ve ever encountered.

He's come for revenge against his elder sibling with a a world-shattering plot. Jakob teams up with familiar foe Cipher (Charlize Theron) in their quest for vengeance against Dom and his family.